Given that the 1 kilo loaf of Matera bread we were kindly given is rapidly starting to harden up, I needed a recipe to use up a lot of crusty stale bread, and I needed it fast. I came across the Italian recipe of Canederli – a sort of stale bread based gnocchi. This was perfect as I knew I could make extra and freeze the remainder.

I started off by putting a broth on to the boil. I looked for a bag of bones at the butchers yesterday, but they had run out, unfortunately. Normally you can get a great bag of bones for stock for 25p. It made me laugh that one woman in a different butchers offered me a gammon hock for £1.50 – it was bargain sans meat that I was after! Anyway, since I didn’t have the bones, I gave in and used a stock cube, adding some onion ends (with peel to give the stock a nice dark colour – leave them out if you want a lighter stock), carrots and chopped lovage stems. The ones you can see in the picture are ready chopped and frozen from the garden lovage plant.
While this was boiling, I made a start on the canederli themselves. I roughly chopped about 500g of the crusty Matera bread and put it into a big bowl. I added the same amount in mls (e.g. 500mls) of milk, 2 eggs and salt and pepper. This needs to be left for almost an hour for the bread to soften up completely, especially if the bread is very crusty. I’d recommend using your hands once the soaking has commenced as it helps you to see how mushy the bread’s getting and whether you need to add a little more milk or not.
So, stock on, bread soaking, there was plenty of time to prepare the other ingredients. Chop finely a small onion and a load of bacon. I used half the weight of bacon to the bread measurement, so about 250g in this instance. In the original recipe, you’re looking at using Speck or some other delicious Italian meat here, but for economy’s sake, I picked up a kilo of bacon misshapes from the butchers for £1.59 and used a quarter in the recipe.
You essentially want to cook these down as much as possible. I think the crispier you get the bacony bits, the nicer your canederli will be at the end. Once the onion and bacon is well fried, take it off the heat and leave it to cool.
You will probably have to wait a little bit now until you’re ready for the next stage, so go and put your feet up for a minute……OK?… Relaxed? Let’s carry on.
Given that your stock’s been on for over an hour now, it’ll probably be cool to turn that off and strain out the veg so it’s ready for when you want to cook the canederli.
Make sure the bread mix is all nice and soft, then add a good grating of nutmeg, your chosen herbs (I went for chives out of the garden, again chopped up with scissors, however I would have thrown some parsley in to if I had any to hand). Finally you’ll need about 80-100g flour. Mix it all up and see how the consistency is. It needs to hold together really quite well to withstand the cooking process.
Get your stock back up to a rolling boil and shape your canederli into ball shapes. I made mine much smaller than other examples I have seen, so that they would cook in 5 minutes, rather than 15. However, given how filling a portion of 7 of these at my size was, I might consider trying even smaller next time.
When your stock is boiling, put a sacrificial canederli into it, to boil away gently. If it breaks into bits, your mixture is not firm enough and you need to add more flour. My personal recommendation is that if this first test one does not fall apart, leave it 5 minutes or so to cook through thoroughly and then sneakily eat it alone in the kitchen. That’s what I did, after all you’ve worked hard on this meal already, you’ve deserved it.
After 5 minutes or so, you’re done! Use a slotted spoon to fish them out of the stock and put them on your serving dish. You can simply serve them with a bit of the broth they were cooked in, but to suit the taste of the people I was cooking for, I made a quick tomato sauce and added some cheese just straight over the top.
They were really good, quite a firm gnocchi like texture, enjoyable bacon bits throughout and a really nice subtle flavouring from the lovage in the stock. The quantity I made more than comfortably fed three, with more than half left over, so I think this amount could easily make 8 portions. I’ve got the rest of mine in the freezer. You can either roll them ready to cook straight from the freezer, but give them a lot longer, or as I have done freeze all in a big lump, to defrost and shape when you need them. 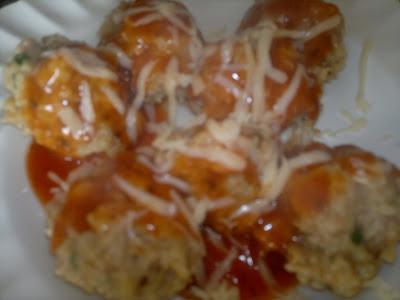