We were lucky enough to win a short break with Fab France, Fab Wines at the end of last year. This week we finally had the chance to get away to take the prize!

We flew to Bordeaux from Luton Airport on Tuesday morning, spent the day in Bordeaux then went on to our hotel, the 5* Les Sources de Caudalie. The hotel is a beautiful complex of building, created by the current owners of Chateau Smith Haut Lafitte. They built the hotel to diversify their business, making a high class hotel complete with unique vinotherapy spa and Michelin starred restaurant.

The hotel is set in the midst of the Chateau’s vinyards, on a slight hill (hence the Chateau’s name). Tastefully selected, yet imposing sculptures stand around the ground. A number of these works were by the sculptor, Barry Flanagan and I thought these were beautiful. Huge works in metal stand proudly amidst the endless rows of vines, or peep behind a secluded corner of the hotel’s gardens. The hare seems to be particularly well known and a steady stream of visitors appear to pass by to take a photo of themselves with it – as did I! 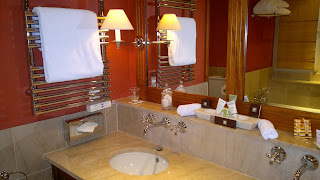 The hotel has all the facilities that one would expect to deserve the 5* rating. We stayed in Room 23 – named Georges Smith, after the Scottish winemaker who once owned the Chateau. At a staggering 300 Eur per night tariff, we were expecting something pretty special. It was special, but perhaps I find it hard to imagine any hotel room worth this sort of money!! The four poster bed and delightfully French traditional furniture really set off the plain, but warm decoration. There were odd prints around the room and a truly opulent bathroom complete with separate bath and shower. The hotel supplied mini bathroom products, all from the Caudalie spa range, which were excellent to use – especially the night correction cream. There were slippers, robes, comb, sewing kit – anything really you might need. I really liked that the room contained wine glasses and a corkscrew – this came in very handy!! We had a beautiful balcony that looked out over the vines and we could just see the Chateau from the corner. 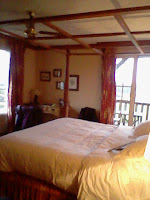 The main problems that we had was that there were no drink making facilities provided in the room. We came to the conclusion that if you had enough money to stay there, you wouldn’t want to make yourself a cup of tea anyway, you’d just ring room service for one. However, for us it was a bit of a pain. Another small point was the ‘cable TV’ that the website boasted included only the standard 5 or 6 French channels and a few foreign news services. CNN and Bloomberg were the only English language channels available and they are, quite frankly, pants. When we wanted a bit of background noise to break things up a bit we found ourselves endlessly irritated by the inane CNN presenters. Obviously, you don’t go there to watch TV, but it would be nice at least to be able to catch up on world events with BBC World Service or some such. There is a DVD player though, which we weren’t aware of so we didn’t take any films to watch in bed! 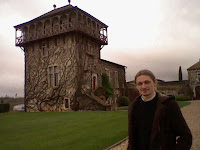 We also found (as per the reviews we’d seen on Tripadvisor) that some of the staff had a slightly haughty attitude. This was noticeably more prevalent in the male members of staff than the female. Again, this is probably a money thing. We stood out like a sore thumb in the hotel and some of the staff made sure we knew it. C’est la vie I suppose, but you would hope that at such a high quality venue, all guests would be treated equally.

The hotel has two restaurants, the regular Table du Lavoir and the Michelin starred La Grand’Vigne. On our second night we decided to well and truly break the bank – and go to the regular restaurant!! We both had the duck breast with apple and red cabbage. At a jaw dropping 18 Eur per plate, we were expecting gold plated duck, and indeed the flavours were excellent. The breast was cooked nicely a point- just how we wanted it. The sweetness of the red cabbage and caramalised apple went beautifully with the duck, cutting through the opulence of the fat. However, as it customary in French cuisine, we found ourselves desperately trying to fill up on bread to make it feel like we’d eaten an entire meal!!

The hotel’s other facilities include an outdoor heated pool, a heated outdoor jacuzzi, fitness room (although this is very sparsely equipped so I wasn’t inclined to use it), 3 hole golf course, tennis courts and bikes available for free hire. It was a good thing that these facilities are available as the complex is a little bit out of the way. Beware the receptionists though, they clearly have a good deal going with local taxi firms as they charge the earth!! We wanted to get a taxi up to the local bus stop to assist us in getting to the airport more easily this morning. It was approximately a 3.5km journey and ended up taking us about 35-40 minutes to walk it. The hotel staff had generously offered to arrange a 36 Eur taxi fare for us, which we politely declined!! They literally have no concept of time/distance and were really trying to encourage us out of the simple walk back to the Le Cub TBC Bordeaux transport system and also were unsure about the wisdom of cycling to Martillac for some lunch, which transpired to be a sub-10 minute bike ride!!!

So all in, this was an incredibly beautiful hotel. We enjoyed a very informative and enjoyable tour of the Chateau and wine tasting with the lovely guide, Xavier. Taking the bikes out round the local countryside was a joy and our room was gorgeous. However, it all comes down to money. Like, free for those who can afford it, it seems. Don’t go here unless you have pots of cash to blow and a hire car to allow you to escape any snobby staff more easily!