I thought I’d add in another cheeky post today because I just made a winter cobbler and it was so nom! This is a great little recipe if you’ve got vegetarians to entertain, or like us, you don’t remember to buy meat very often! I think most of the veg would be interchangeable, so if you’ve got some squash, or turnip, or any bulky veg then chuck it in. 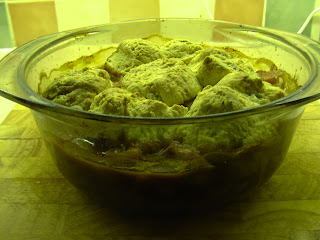 I got the inspiration for this recipe from one featured on the Morrisons website that Google pointed me towards. Naturally, I just read it through and thought ‘that’s what I thought’! This savoury cobbler consists of a mixture of veg, sauteed down first. I used onions, garlic, potato, leek, parsnip, swede, carrot and some of the frozen lovage stalks from our freezer instead of celery. Once sauteed down, I threw in a rosemary sprig, some tomato puree, a tin of chopped tomatoes and some stock. 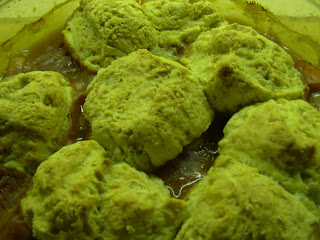 Leaving the base to simmer, I made up the scone recipe as per the morrisons site, although I swapped the parmesan for stilton and probably put in much more than they recommended. I also used water instead of milk. I’m glad I used their recipe, the scones were lovely and light and really soaked up the sauce when you eat the cobbler. 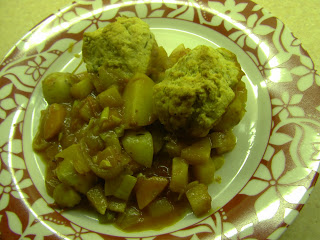 Once the veg has all simmered together and are all soft, the recipe recommends to add some gravy granuales to thicken the sauce slightly. I used to do this years ago, but husband thinks it’s a bit sacriligious. He’s a real gravy man, however, this once I snuck it in. Don’t forget to use veggie gravy granuales if you’re cooking for veggies!! Then you whack it all in an ovenproof dish, shape the scones (I just cut the dough into 8) and plonk them on the top, stick in the oven at 200C for 25 minutes.

I let it stand for about 10 minutes before serving and it tasted NOM! Glad I’m having that for my lunch tomorrow!