Looking to the Future

Happy New Year everyone! Here we are, in 2011. I had a great NYE last night at the pub with hubby and a mate, topped off with an excellent 3am cross country walk home, complete with singing the Greatful Dead at the top of our voices. 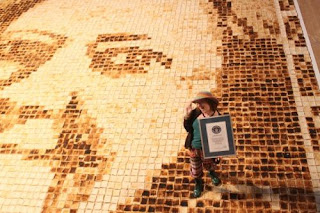 Looking back, it has been a pretty packed year. Despite not going on holiday, we’ve still managed to squeeze in some fun experiences. There have been lots of walks in the park, picnics, BBQs – mainly thanks to the heavenly weather we received earlier in 2010, if anyone can stil remember! Of course, 2010 will always be the year that we broke a Guinness World Record by making the world’s biggest toast mosaic in homage to my mother in law’s 50th birthday. Following that, I discovered what it was like to be continuously phoned by journalists for a week, to be a question on Have I Got News For You and to be referred to as ‘British Artist, Laura Hadland’. Lol!

Following the toast mosaic, I made more smaller mosaics for the Daily Mail, and of course the Avatar Blu-ray mosaic, which I felt actually qualified as a proper artwork and I am still pretty proud of it!

In Extreme Housewifery terms, as if giant artworks wasn’t enough, there was a good deal of vegetable growing, a return to baking and generally a lot of good food was made. On top of my housewifing, I also received a small sort-of promotion at work, which was nice having been working in the same place for 5 years.

And now looking forward to 2011, it is time to plan. I think Extreme Housewifery this year should be all about trying new things, or doing fun things that I don’t do often enough at the moment! Singing loudly in the dark seems to have been an appropriate start to the year, so now I just need to set some more goals. I think next week I’ll be able to squeeze in some ice skating. I desperately want us to be able to go to California to see our friends, which will definitely be a new experience. And of course, I will be a regular gym goer, all being well, so hopefully I will try out being fit and toned for the first time lol!

Following the spirit of the competition forum, I have also written my ‘Eleventh Heaven’ list for 2011. This is my wishlist of prizes I would like to win this year. I’ve decided this year I’m going to do competitions selfishly, for things that hubby and I want. I’ve spent three years entering competitions to try and win presents for friends and family, but I think this year is going to be about winning stuff for us instead. I don’t know if the universe will approve of this, karma-wise, but perhaps I can do lots of good deeds to offset my selfishness! So this is the list:
1. Holiday
2. Laptop or netbook
3. Food hamper
4. Kinect or PS Move
5. EA Sports Active 2
6. A DVD of a film we want to watch!
7. Knitting/Craft/Crochet goodies
8. New clothes
9. Fancy shoes
10. An ipod
11. A haircut/makeover/spa thingy for pampering!

I don’t think I want to set myself too many rigid goals for the year, as I tend to have a short attention span with such things. However, I think there are certain ideas floating around that I want to get on with this year:

* Go camping
* Do more random acts of kindness
* Complete more crafty projects
* Visit a random event, like a competitive eating competition or some such!
* Decorate the hallway and maybe the bathroom
* Grow sweetcorn and other things!