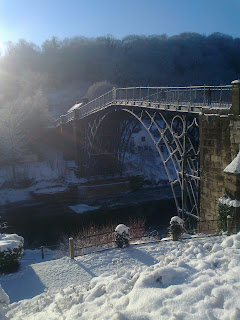 Well, Christmas is over again for another year. A lovely time was spent with the inlaws in Telford, which meant we got to enjoy spectacular views of the River Severn frozen over from bank to bank and Ironbridge Gorge generally in the snow. Most enjoyable.

But now, it means that it is nearly time for Christmas The Second, the highlight of the social calendar. Christmas is faithfully recreated in its entirety, but with your mates over instead of your family. I have prepared the pass the parcels, written the quiz, and today it was time to start readying the food. 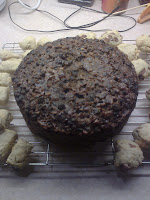 Full Christmas dinner will be made on the day, so today was the day for making snacks. I made a Christmas cake, which I admittedly should have done earlier, but who actually cares? It was from a competition win, a Delia Christmas cake pack from Waitrose. It’s smelling awesome after its alloted 4 hours in the oven and I’ve already fed it with brandy, port, whisky and some elderflower cordial. Lemon vodka will be added shortly before I cover it with dried fruits and nuts!

In anticipation of the angry hordes, I have also created some more delicacies. Some pate and cheese mini scones (with cheese only for the vegetarians), which have come out excellently crumbly. There are also a batch of flapjacks, a tonne of rocky road biscuit and my piece de resistance, some apple and white chocolate muffins and mini muffins.

This was borne out of me having a big jar of apple puree in the fridge that I wanted to bake something in. And as it happened, cooking apples were reduced to 10p/kg in Tesco when I nipped in before (woo hoo!) and so now the muffins have both apple puree and chunks of cooking apple in them.

I shall update on the status of these delights post the Christmas Part Deux celebration.