I decided to give green diagonal striped nail art a go. This was a bit trickier than usual, I think because I used two of the mini Urban Decay nail polishes from their Summer of Love pack for the upper layers. This meant that I had a smaller wand to work with when applying more fiddly detail. Had they been proper nail art pens this would have been a bonus, but in freestyle terms it made things much more complicated. 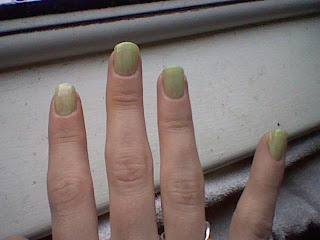 First I applied a layer of a light lime green. This was nail varnish by Jessica. I had not used it before and found that it was disappointingly pale. I was hoping for a more vivid effect. After two coats it was a reasonable finish, but showed up best in daylight, as you can hopefully see from the picture. 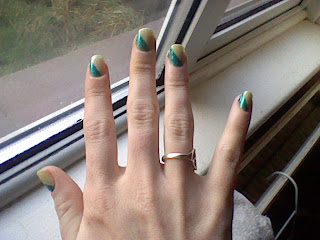 Next I freehanded a darker green Urban Decay diagonal stripe. Apart from the problems with the wand that I have described I was relatively pleased at how easy this was. Once everything had dried, I added a thin stripe of a light gold glitter from the same Urban Decay set. This created a nice finish, but again looks much stronger in daylight.

Having completed this look, I realised I was late and proceeded to throw my makeup on and get ready to go out in about 10 minutes. Which meant I immediately significantly smudged at least three of my nails. Please make a mental note to leave sufficient lazing about time to let your nails dry if you attempt anything of this nature. 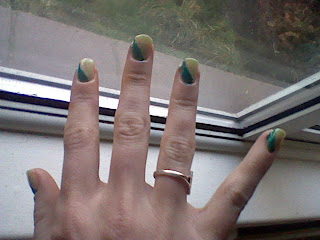 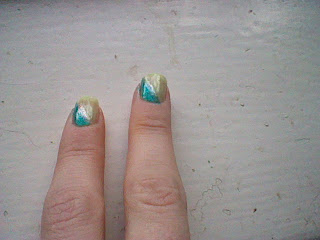