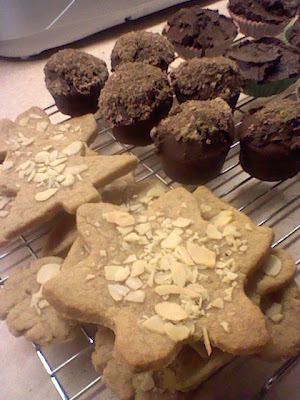 I decided this evening that I wanted to have a break from the computer, have a bit of quality bonding time with my lovely hubby and generally DO something. This is in the effort to resist the urge to sit back and hibernate in this appallingly cold weather. I guess we are lucky in that we have not had snow yet, but hearing the weatherman tell me that tomorrow’s high temperature was likely to be -1 I decided something must be done to avoid the lure of the sofa/duvet combo of ultimate doom.

So, we decided to bake. Hubby went on his merry way creating some European style spiced cookies and in my ultimate wisdom I insisted that he used my set of Christmas cutters because I am excited that it is almost, nearly the time of year where it is OK to do such things again. Unfortunately, I accidentally decapitated the reindeer when removing him from the greaseproof paper. I feel a certain amount of guilt about this. 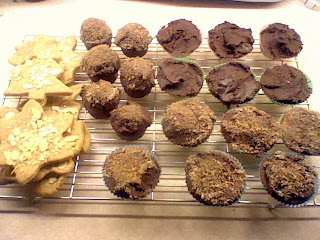 Given that we have nearly a chocolate shelf in the fridge, I realised it was time for me to make something chocolatey to use a bit up. I opted for chocolate cupcakes so that we could get rid of some in an even more yummy way. I tried out a new recipe, where I dissolved a load of cocoa in boiling water and let it cool whilst making up the rest of the batter. For a bit of added nom I included some orange flower water.

Once they were packed off into the oven, I set about making the icing by melting a shit load of dark chocolate in a bowl above a pan of boiling water. While it melted I beat a load of butter with icing sugar, then mixed the whole lot together. This resulted in a satisfyingly gooey and rich icing. Once the cakes had cooled on the rack I thickly smeared the icing on top. 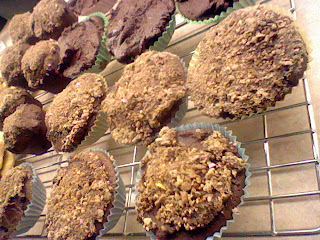 For extra added Homer-drooling, once iced, I dipped some of the cupcakes into some of Ye Olde Traditional Choc Lick(by the way, do please try the Riley’s Toffee from the previous link also, especially the dark chocolate variety – it’s absolutely delicious!). As ever I had a mixture of traditional cupcakes in cases and some made in my cheapo silicon mould from the Poundshop – which continues to do an admirable job.

Anyone for afternoon tea this weekend?