Avatar: The Biggest Blu-Ray Mosaic, EVER! 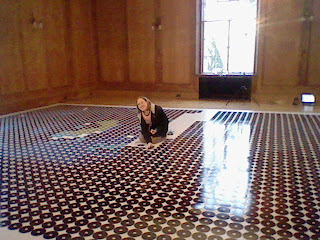 On account of my husband loving films and me liking making massive mosaics out of loads of the same thing, we were invited to make a mosaic out of Blu-rays on behalf of 20th Century Fox to celebrate the launch of Avatar: the Extended Collectors Blu-ray, which is out on Monday 15th November 2010. (More info here…)

This was awesome for a number of reasons. Avatar is a cool film and it’s awesome to be associated with it in some small way. Because Avatar exists, one million trees have been planted worldwide. And finally, designing and making massive mosaics out of lots of the same random thing is awesome.

Breaking the world record for the biggest toast mosaic was loads of fun, but I enjoyed this one more artistically because we were able to use more subtle colour tones and the final piece was more artistic. I think if I did it again, I would make the darkest blue tone a shade or two lighter, because the finished result was really hard to light properly in order to take a decent photo, but we got some. (Pictures from the proper photographer and not my rubbish DS camera will hopefully be added in a later post!) 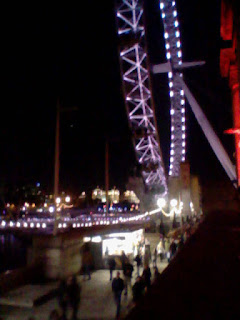 So, we were at the London Film Museum, in one of the Riverside Suites looking out over the London Eye. We used 4000 Blu-ray discs to create the iconic Avatar Navi image. It was 9.6 by 6 metres – so 57.6 square metres in total! It took 5 of us about 4 hours in total. I am proud to say I created the design and was perhaps the ‘artistic lead’ on the project if you will. Mike loved it and loved being involved with it. I hope if any of you read this in time, you pop over to the London Film Museum tomorrow to have a looksee – I think it’s only going to be there for a day or two.

I’m not sure what the final plan for the mosaic is. We glued all of the discs in place, so that the mosaic can be moved. I am hoping that the PR company can find a home for the mosaic in the future, but if not I have been assured that an ethical means of disposal will be found, in harmony with the themes of Avatar.

A great day and another wonderful memory that Mike and I have shared, but now I am knackered and going to bed!

Edit – wow, I just noticed that I accidentally overwrote a load of my photos from the beginning of the day. That sucks. Ah well, my grip on technology is clearly tenuous.