I’ve been using my free weekend to great effect. I made a granny square shoulder bag in record time last week, but don’t know what I’ve done with my yarm needle, so that will sit unfinished with mucky ends for the time being. That’s OK though as it is a birthday present for a friend which I have started early so I can give it out before we go on holiday.

Since finishing that I have begun my most ambitious crochet project – a two colour jumper. This may also be a birthday present or I might keep it, depending on the finished size – I still haven’t really figured out the whole gauge thing and just tend to make things in the hope that it’ll fit. I reckon this’ll be quite funky when it’s finished as it’ll be green and purple blocks of colour, random but cool. I’ve nearly done two of the four main panels so far – I would be further ahead but redid the first panel as I messed it up at the beginning a bit as I wasn’t used to the pattern. One of the things I am struggling a bit is getting the edge straight – I am working the front panels long wise and I think I’m gonna end up with a slightly wonky bottom, but I reckon I’ll be able to put on an extra edge when I’ve put the whole thing together that’ll sort it out.

Also, in my role as extreme housewife today I have created an exciting new item for roast dinners – Meanloaf! I blitzed up some bacon, kidney beans, spices, peanuts and some stale baguette then baked off in a loaf tin. It was pretty darn tasty! And we got some duck fat from Tesco yesterday so had lovely crispy potatoes. And to finish a blueberry and blackcurrant cake which is quite heavy but good. I think the problem is that I only had cheap spread to use not butter, but it still tastes good. 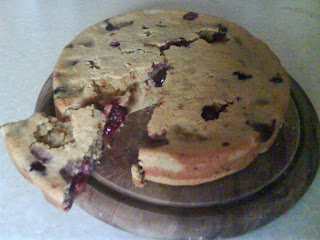 Can’t decide whether to ice the cake now. I’ve got lots of sprinkles and decorations and whatnot, but I’ve already ate some now cos I wanted some while it was hot. It’s probably sweet enough but it seems a shame not to use me sugar sprinkles and that. Mind you, I’m so full from the extra stodge dinner I don’t know if I can be bothered now! 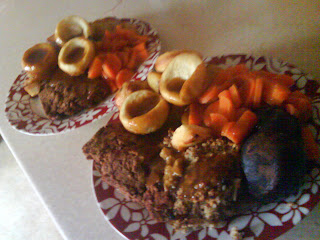 The roasted beetroot didn’t work 🙁 – needed cooking for longer. Ah well, not done that before and it was a bit of an afterthought so doesn’t really matter. 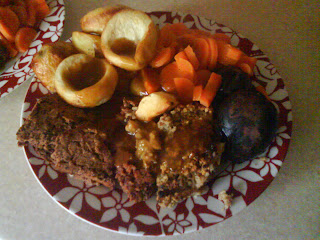 So, another evening of jumper making before me. Onwards and upwards, I shall attempt to solve the problems as they crop up!